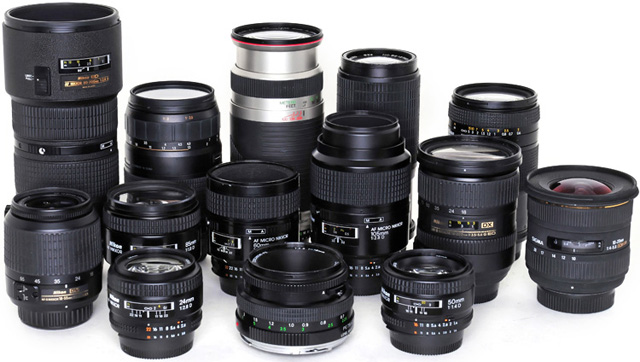 I take the time to use each lens I review. Some sites feel it is okay to review a lens based solely on the specifications and sample photos provided by the lens manufacturer. I feel this is a guess not a review.

Each lens listed is one I own or owned, spending my own personal money to obtain. If a company provides a sample lens to me for review I will state that in a review. Other than the ads that appear I make no money from anyone for these reviews so I can keep away from any appearance of bias.

I am primarily a Nikon shooter so I will admit a bias towards lenses that work, either directly or through adaptation, on an Nikon F-mount camera. I have Pentax film and digital cameras as well as medium format, but the majority of these reviews are written from a Nikon standpoint. If you shoot something else, Canon for example, the basic lens concept should apply to you as well, but your mileage my vary.

Primes are logically grouped by their origin or manufacturer.

The Nikon-made lenses are an excellent option to use with your Nikon camera.

As an overall brand of lenses I have found Nikon/Nikkor to be the best quality glass that is available. That doesn't mean every Nikkor is a hit, there have been some terrible things. But generally speaking, using a Nikkor will likely result in great photos.

Pulling together a list of lenses listed as being macro, or dur to their back focal distance they ended up being close-focus, without regard to brand.

The Soviets copied many lenses and adapted others to their manufacturing capabilities. Sometimes they even created original lenses. Although usually lacking things like auto-focus, the Russian lenses offer a great deal of quality for a low price.

German engineering and manufacturing has lead to many outstanding optical wonders.

Often copied by the Russians, many German lens designs set the standard for photography a century ago that are still in use today.

It should be noted that these items are not desired just for their optical capabilities, but lens collectors often look for a specific brand just to own it. I am more focused on the usability of a lens, not its collector value, so that is what I review: the functionality and practicality of a lens.

Previously seen as a third-party, soft of an off-brand, lens maker Sigma has worked hard over the past few years to recreate themselves as being a high-end lens maker.

Previously seen as a third-party, soft of an off-brand, lens maker Sigma has worked hard over the past few years to recreate themselves as being a high-end lens maker.

Projector, Enlarger, or Other Non-Camera Lenses

These lenses started off life with a use other than being a camera lens. It may take some work to get these to work on your camera but often it is worth it. Sometimes the original lens itself is quite cheap, resulting in an overall low investment. Many times the look that is achieved is unique.

Regardless of the reason to do so, taking a lens and making it work can be very rewarding to accomplish and to enjoy the resulting photos.

Although these may not be high-end brands, often quality lenses can be found among this bunch, if you shop around.

These are lenses I own but I need to research them further to know better how to classify them into one of the above groups.

Zooms Listed from widest to longest


The following list are lenses I would like more time with before I'd feel comfortable reviewing them. These are lenses I don't own, but maybe have borrowed or had a student show up with one. A listing here doesn't mean a recommendation, just an interest from me in knowing more. If you have one you'd like to let me borrow, please contact me. Thanks.

Confused by all of the lenses above? Not sure what is the right lens for the situation you're going to photograph? Then check out this article that I wrote on the main types of photography and the lens I choose for the job.