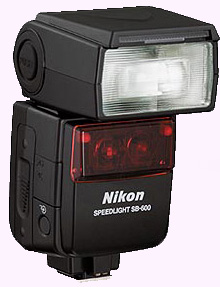 I ordered mine from Amazon

but I would also trust the good guys over at Adorama.

This is the middle flash model of Nikon's latest trio of flash models. Unlike Goldie Locks and the Three Bears this middle-option is likely going to be just right for most of you out there.

It is miles ahead of the only-slightly-cheaper SB-400 but only a little behind its big brother, the SB-800.

Works on a film camera: Yes.

Controls: Yes, this flash has buttons and an illuminated display.

Wireless Control: Nikon CLS (Creative Lighting System) that uses IR only. No port for wired or other wireless trigger. 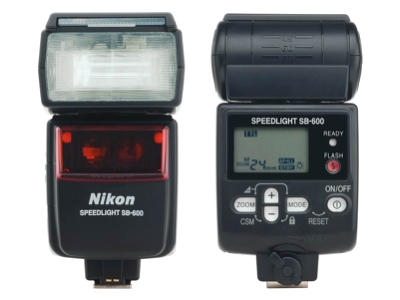 Front and Rear views of the Nikon SB-600 Flash

This flash has served me well for quite some time in all sorts of situations.

I quickly added to it some diffusers to soften the light a little bit and it has made a big difference.

This flash is my recommendation for a Nikon hot-shoe-enabled flash.

The SB-400 is a terrible flash and should be ignored by everyone and the expensive SB-800 is for professionals who will use it on a nearly daily basis and need the slight improvements over the SB-600.