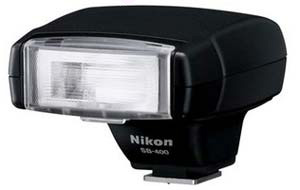 For this review I borrowed one from a friend. If I was crazy enough to want to waste money on one, I'd probably buy it from Adorama or Amazon.

This is a small and light-weight (but not super cheap in price) flash unit designed to be at the bottom end of Nikon's latest trio of camera-mountable flash units.

It is easily out-classed by the much better SB-600 flash from Nikon and I can't see how the SB-400 is worth the money in comparison.

Power source: Two AA batteries - That is convenient and keeps the weight down. But, at the cost of lower power and longer refresh times.

Bounce Flash: Sort of. You can aim the flash straight "up" when shooting horizontally, but if you position the camera for a vertical portrait then the flash points to the side and there's no way to angle it in the new "up."

Red-Eye Light: This flash uses the highly-tested method of blinding your subject with a series of "pre-flashes" before the real one. This way there will be no red-eye since no one will have their eyes open. This is really silly when you figure that using a non-built-in flash should itself reduce or eliminate red-eye in the first place due to its location being further from the lens.

Wireless Control: NONE. No jack for a wired or wireless and no IR for the Nikon CLS (Creative Lighting System).

Front and Rear views of the Nikon SB-400 Flash

To say that this flash works in the hot-shoe of my camera is to say that the AMC Pacer worked as a car: both do the very basic principles of their genre, but do so in such a way that you can't stand them.

This flash just makes no sense to me at all given its price. If it were $45(US) it might make some sense since it would be so cheap that I wouldn't expect it to do anything, and I'd be right, but at $120(US) I expect at least something out of this flash.

Okay, maybe I am being a little too hard on the little flash that could. It does let you use wider lenses without casting a shadow, and it does recycle faster than the built-in flash on your camera. So, in a world without other options I would likely praise this lens for performing so much better than the on-camera flash, but sadly this flash does live in a world with other options and they all blow this flash out of the water.

Because of this, I cannot recommend that anyone invest in an SB-400. I think you get a lot more bang for your buck if you get an SB-600 to start.

On the other hand, if all you have is the D40 or the D40x and you have zero interest in doing real photography for 5+ years (the likely amount of time for a new generation of equipment to put this stuff out to pasture), and anything with an option beyond "on/off" scares you, then maybe you'd like having a small and lightweight flash option, but I can't see how it will be much better than the built-in flash on your camera in the long run.