I got first set here. Then, after I saw they were on sale, I picked up more here

. Yes, I paid full price from a good retail place. I didn't know how well these work would so I didn't take any eBay-risk and bought them brand new.

These are premium (premium means expensive) radio triggers for studio strobes. They also work with many camera-brand shoe-mount flashes and they can also be used to remotely trigger your camera's shutter.

They work very well, have lots of desirable features, but their cost is enormous for what they are and do and to get them to work with your equipment typically requires additional costs as well.

Out of the box these devices can be either the camera-attached sending unit or the strobe-attached receiver. This is a nice feature since you don't have to worry about getting them mixed up on your way to a location shoot. Adding on to your collection of them means you can grow flexibility since each unit can do double duty.

They take two AA type batteries, which are included in the box. This is a good thing when spending nearly $200US to be given $1 worth of batteries.

The units use on/off switches and while they are on they flash little red lights on them. These lights will flash differently depending on the mode you set the unit itself to use.

Also included in the box is a velcro sticker-set to enhance sticking the unit onto a studio strobe. There are competitors offering screw-on velcro attachment devices that give a larger velcro area and then don't leave sticky residue on the PocketWizard unit itself. These add-on items are very expensive and I don't own any.

Another welcome addition to the included goodies is a wrist-strap / lanyard kind of thing. I use one of these on my strobe-attached PocketWizard and I then hang the unit from either the power cord plug or a lightstand knob or something. I left the strap off of the one I use on my camera body.

One item in the box that didn't help me was a 6-inch cord. As I use AlienBees studio strobes this cable didn't hook up to anything for me. Instead, I purchased a double-ended male mini mono cord from my local RadioShack. I bought part number 42-2420A. This cost me $3.99US. I may later cut this cord in half since it is 6 feet long and put some mini mono ends and solder them on to the cut ends yielding me two 3 foot cords.

Not included is the 3V AC adapter. I don't use mine hard-powered and I bought them because of their use of 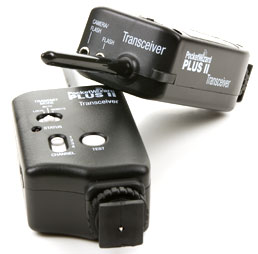 AA batteries, so this isn't that big of a deal for me. However, this is yet another cost if you desire to do this setup and compared to other brands (like AlienBees) this is another major difference.

They work. I have not had any non-fires or extraneous firings of the strobes at all. I cannot find any fault with the operation of these devices on their own.

I can compare them to the AlienBees radio triggers (seperate review coming soon) which I was using prior to investing several hundred dollars into the PocketWizards. The AlienBees radio triggers worked fine enough for me in the shooting setup I use. I had a few instances where they didn't trigger over about a year's worth of use and I noticed some interference at one point as well. I've heard that this is a similar experience that other photographers have with other sub-$100 radio triggers, many of which can be found in affordable sets on eBay.

The PocketWizards are a step up for me, but I didn't upgrade due to any perceived fault with the AlienBees that I had at the time. One reason I upgraded is because the PocketWizards use AA batteries. I like to carry backups to things: backup bodies, extra lenses, a second flash, but with my AlienBees radio triggers I couldn't change the batteries in the trigger and to have a "spare" AlienBees I'd need both a spare trigger and sender. Plus, AlienBees has ceased making the style of radio trigger I invested in. So I worried about that company's longterm reliability in the radio trigger market.

But, perhaps the major reason for my upgrade to the PocketWizards was because my Sekonic L-358 Light Meter could work directly with PocketWizards. Under the AlienBees setup

I had to take the trigger off of my camera and walk around with that in addition to the light meter to fire the strobes. I know that this is a highly personal reason for wanting to spend hundreds of dollars, but to me the ease of using a single device to do what it is intended for and to reduce confusion among myself and any assistants as to who has the trigger now or investing in more triggers (which I can't do now that they don't make them any more). Your mileage may vary and I am not saying that anyone else in the world is like me in this line of thinking.

Another reason that I upgraded, and I am already enjoying this, is that because these items are so expensive they are cost prohibitive to your regular hobbyist. I know this is a cruel thing to say, but I have a higher degree of confidence that when I show up to a wedding I won't have an "Uncle Bob" who can trigger my strobes when I'm trying to take a shot. I love the "Uncle Bob's" of the world, and I always encourage them to get a good shot at the weddings I cover, but if someone other than a person on my staff is tripping my strobes then I can't get the photos I was hired to do.

One thing that I'm interested in playing with, but have not have the opportunity, is to trigger my camera's shutter and then have that trip the strobes. This is a relay mode that these dual sender/receiver modules are capable of doing. The way it works is that you set the camera-attached unit to one channel and the strobes to the next higher channel. For example, set the camera on 2 and the strobes on 3. Then, if you trip channel 2 it will fire the camera and the camera's connection to the hot-shoe will fire channel 3 hitting the studio lights.

This remote camera thing interests me when I have a camera on a tripod and I'm working with a difficult subject, like a pet or baby. I can use a distraction (like a toy) and be able to operate the camera. Right now I do this using an IR remote from Nikon, which works okay, but is prone to not firing unless I aim it just right.

The reason I haven't tested this PocketWizards trick is that I'd need another cord that, you guessed it, isn't supplied and is expensive. Stay tuned for updates.

I know that I may be the only one in the world who upgraded to PocketWizards for the reasons that I did, but if could I do it all over again I should have just bit the bullet and thrown my money at the PocketWizards from the start. My motivations for not doing so was I felt they were very over priced for what they do (which I still think is true) and I felt that if I stuck with my strobe vendor's radio triggers I'd have a better setup. Well, my vendor didn't stick with me and is now selling at least their third radio trigger setup and I can't keep changing setups every year or two as this vendor changes their mind.

If you invest your money into this brand of radio triggers I am sure you will end up being happy in the long run, but expect to have to figure out what cords you need and how to get them in an affordable way.

I have used some of the older PocketWizard gear and they work fine as well. While some of the really older stuff is gray in color and might not look as professional today next to the nice black offerings, it is what works that counts and if the older stuff works for you then stick with it. You should be able to find good deals on eBay as folks upgrade for vanity.